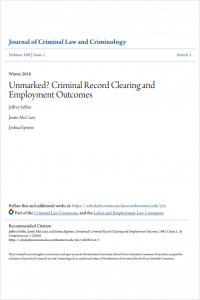 As per this article, an estimated one in three American adults has a criminal record. While some records are for serious offenses, most are for arrests or relatively low-level misdemeanors. According to the authors, in an era of heightened security concerns, easily available data and increased criminal background checks, these records act as a substantial barrier to gainful employment and other opportunities. Harvard sociologist Devah Pager describes people with criminal records as “marked” with a negative job credential.

According to the authors, more research needs to be done to understand the durability of the positive impact and its effects in different local settings and labor markets, but these findings suggest that the record clearing intervention makes a meaningful difference in employment outcomes for people with criminal records. The findings also suggest the importance of early intervention to increase opportunities for people with criminal records. Such interventions might include more legal services, but they might also include record clearing by operation of law or another mechanism that does not put the onus of unmarking on the person with a criminal record.