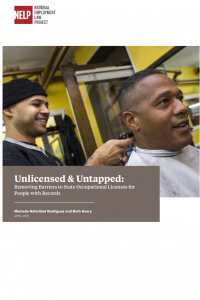 The report's authors recommend a comprehensive overhaul of licensing laws to incorporate standards that promote greater transparency and accountability—ultimately producing fairer, more consistently applied licensing laws. The authors provide a Model State Law in the Appendix, which incorporates their Recommendations. In addition, they have analyzed the general licensing laws of 39 states and the District of Columbia that, to some degree, restrict most licensing boards’ consideration of arrest and conviction records.