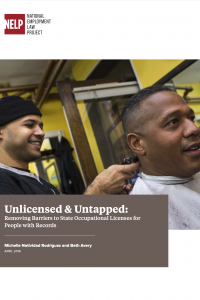 According to this report from the National Employment Law Project (NELP), nearly one in three U.S. adults has a record in the criminal justice system. While uncommon, the report's authors state that the resulting stigma and its lifelong consequences prove devastating for many.

The report discusses the more than one-quarter of U.S. workers who require a state license to practice their occupation, including those in more typically known regulated jobs, such as nurses and teachers as well as many occupations in sales, management, and construction also require a state license. While some argue that state licensing for certain jobs is necessary to maintain public safety and results in higher practitioner wages and greater respect for the profession, critics of licensing argue that regulating occupations does little to advance safety or quality of service and instead negatively impacts consumers and low-wage workers.

In response to a maze of barriers to occupational licensing for individuals with a criminal record, the report features recommendations for a comprehensive overhaul of licensing laws to "incorporate standards that promote greater transparency and accountability—ultimately producing fairer, more consistently applied licensing laws." The report offers a Model State Law in the Appendix, which incorporates these recommendations. The report also features analysis of the general licensing laws of 39 states and the District of Columbia that, to some degree, restrict most licensing boards’ consideration of arrest and conviction records.