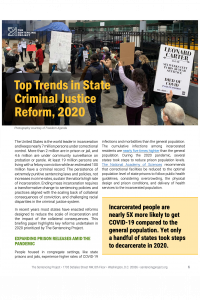 According to this brief, the United States is the world leader in incarceration and keeps nearly 7 million persons under correctional control. More than 2 million are in prison or jail, and 4.6 million are under community surveillance on probation or parole. At least 19 million persons are living with a felony conviction while an estimated 100 million have a criminal record.

The brief's author argues that the persistence of extremely punitive sentencing laws and policies, not increases in crime rates, sustain the nation’s high rate of incarceration. The author also asserts that ending mass incarceration requires a transformative change to sentencing policies and practices aligned with the scaling back of collateral consequences of conviction, and challenging racial disparities in the criminal justice system.

This brief discusses that, in recent years, most states have enacted reforms designed to reduce the scale of incarceration and the impact of the collateral consequences and highlights key reforms undertaken in 2020 as prioritized by The Sentencing Project.