Statistical (and Racial) Discrimination, 'Ban the Box', and Crime Rates 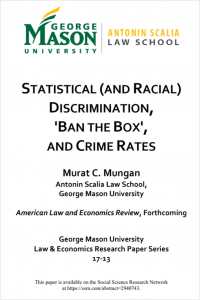 This article presents law enforcement models where employers engage in statistical discrimination, and the visibility of criminal records can be adjusted through policies (such as ban the box campaigns). The author shows that statistical discrimination leads to an increase in crime rates under plausible conditions. According to the author, this suggests that societies in which membership to disadvantaged groups is salient (e.g. through greater racial or religious heterogeneity) are, ceteris paribus, likely to have higher crime rates.

The author further argues that, attempting to fix the negative impacts of statistical discrimination through policies that reduce the visibility of criminal records increases crime rates further. Moreover, he contends, such policies cause a greater negative effect for law abiding members of the disadvantaged group than members of the statistically favored group.