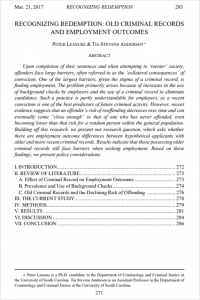 According to the article's authors, upon completion of their sentences and when attempting to ‘reenter’ society, offenders face large barriers, often referred to as the ‘collateral consequences’ of conviction. One of the largest barriers, given the stigma of a criminal record, is finding employment.

The problem, the authors continue, primarily arises because of increases in the use of background checks by employers and the use of a criminal record to eliminate candidates. Such a practice is partly understandable for employers, as a recent conviction is one of the best predictors of future criminal activity. However, recent evidence suggests that an offender’s risk of reoffending decreases over time and can eventually come “close enough” to that of one who has never offended, even becoming lower than that risk for a random person within the general population.

Building off this research, the article presents the core research question, which asks whether there are employment outcome differences between hypothetical applicants with older and more recent criminal records. Results indicate that those possessing older criminal records still face barriers when seeking employment. Based on these findings, the authors present policy considerations.