Putting Time Limits on the Punitiveness of the Criminal Justice System 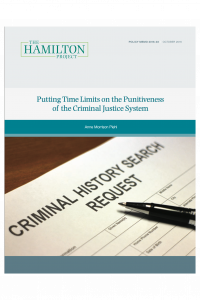 According to this policy memo's author, over the past 30 years, both the incarcerated population and the limitations placed on those with criminal records have dramatically expanded. The consequences of a criminal conviction can last long beyond any imposed sentence, but current efforts to reduce the punitiveness of the criminal justice system tend to focus on sentencing reform rather than consequences for those who have already served prison terms.

The memo offers three principles for reform efforts aimed at reducing criminal justice punitiveness. First, negative consequences of prior criminal convictions should be targeted to enhance public safety. Second, processes for time-limiting information about convictions should be implemented. Finally, decreases in the severity of criminal punishment should generally be automatically and retroactively applied. The author contends that reform efforts that follow these principles can better target society’s resources toward people with the highest risk of offending.