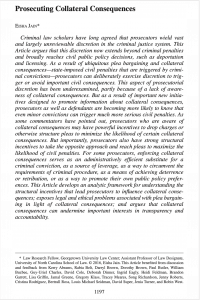 According to the article's author, criminal law scholars have long agreed that prosecutors wield vast and largely unreviewable discretion in the criminal justice system. This article argues that this discretion now extends beyond criminal penalties and broadly reaches civil public policy decisions, such as deportation and licensing.

As some commentators have pointed out, prosecutors who are aware of collateral consequences may have powerful incentives to drop charges or otherwise structure pleas to minimize the likelihood of certain collateral consequences. But importantly, prosecutors also have strong structural incentives to take the opposite approach and reach pleas to maximize the likelihood of civil penalties. For some prosecutors, enforcing collateral consequences serves as an administratively efficient substitute for a criminal conviction, as a source of leverage, as a way to circumvent the requirements of criminal procedure, as a means of achieving deterrence or retribution, or as a way to promote their own public policy preferences.