The Price We Pay: Economic Costs of Barriers to Employment for Former Prisoners and People Convicted of Felonies 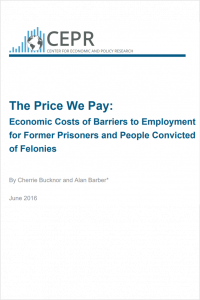 The report discusses that, despite modest declines in recent years, the large and decades-long blossoming of the prison population ensure that it will take many years before the United States sees a corresponding decrease in the number of former prisoners. Using data from the Bureau of Justice Statistics (BJS), this report estimates that there were between 14 and 15.8 million working-age people with felony convictions in 2014, of whom between 6.1 and 6.9 million were former prisoners.

Prior research has shown the adverse impact that time in prison or a felony conviction can have on a person’s employment prospects. According to the report's authors, in addition to the stigma attached to a criminal record, these impacts can include the erosion of basic job skills, disruption of formal education, and the loss of social networks that can improve job-finding prospects. Those with felony convictions also face legal restrictions that lock them out of many government jobs and licensed professions.

Assuming a mid-range 12% employment penalty for this population, this report finds that there was a 0.9–1.0% reduction in the overall employment rate in 2014, equivalent to the loss of 1.7 to 1.9 million workers. In terms of the cost to the economy as a whole, this suggests a loss of about $78 to $87 billion in annual gross domestic product (GDP).