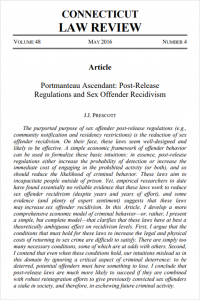 According to the article's author, the purported purpose of sex offender post-release regulations (e.g., community notification and residency restrictions) is the reduction of sex offender recidivism. On their face, the author continues, these laws seem well-designed and likely to be effective.

As per the author, a simple economic framework of offender behavior can be used to formalize these basic intuitions: in essence, post-release regulations either increase the probability of detection or increase the immediate cost of engaging in the prohibited activity (or both), and so should reduce the likelihood of criminal behavior. These laws aim to incapacitate people outside of prison. Yet, the author contends that empirical researchers to date have found essentially no reliable evidence that these laws work to reduce sex offender recidivism (despite years and years of effort), and some evidence (and plenty of expert sentiment) suggests that these laws may increase sex offender recidivism.

In this article, the author develops a more comprehensive economic model of criminal behavior—presenting a simple, but complete model—that clarifies that these laws have at best a theoretically ambiguous effect on recidivism levels. First, the author argues that the conditions that must hold for these laws to increase the legal and physical costs of returning to sex crime are difficult to satisfy. There are simply too many necessary conditions, some of which are at odds with others. Second, the author contends that even when these conditions hold, our intuitions mislead us in this domain by ignoring a critical aspect of criminal deterrence: to be deterred, potential offenders must have something to lose. The author conclude that post-release laws are much more likely to succeed if they are combined with robust reintegration efforts to give previously convicted sex offenders a stake in society, and therefore, in eschewing future criminal activity.