Paying Their Debt to Society: Forgiveness, Redemption, and the Uniform Collateral Consequences of Conviction Act 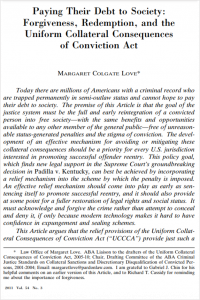 This article argues that the relief provisions of the Uniform Collateral Consequences of Conviction Act (“UCCCA”) provide just such a mechanism. It begins by telling the story of Darrell Langdon, a Chicago man whose status as a “convicted felon” barred him from a job he had performed well for many years, but who was able to overcome this barrier with the help of an Illinois law similar to the relevant provisions of the UCCCA. It then reviews the dysfunctional state of relief mechanisms in most U.S. jurisdictions today and how they got that way. Finally, it describes the integrated approach to collateral consequences taken by the UCCCA, suggests how Darrell Langdon’s case would have fared in that framework, and concludes that the UCCCA provides a comprehensive and functional way of extending forgiveness and recognizing redemption, both essential capabilities of a mature justice system.