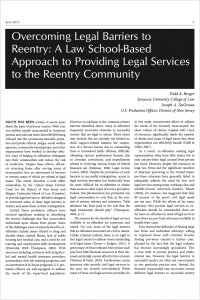 Much has been written in recent years about the topic of prisoner reentry. With over two million people incarcerated in America’s prisons and jails and more than 600,000 being released into the community annually, probation and parole officers, judges, social welfare agencies, community-based groups, and other organizations have worked to develop effective ways of helping ex-offenders reintegrate into their communities and reduce the risk of recidivism. The articles authors argue that, despite these efforts, offenders returning home after serving terms of incarceration face an assortment of barriers to reentry, many of which are related to legal issues.

This article describes a joint effort undertaken by the United States District Court for the District of New Jersey and Rutgers University School of Law (Camden) to provide legal services to offenders designed to overcome some of these legal barriers to reentry and assist them in their reintegration.