One Strike and You’re Out: How We Can Eliminate Barriers to Economic Security and Mobility for People with Criminal Records 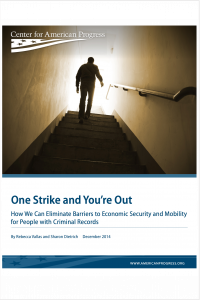 This report discusses that many of the 70 million to 100 million Americans—or as many as one in three— have a criminal record. Many have only minor offenses, such as misdemeanors and non-serious infractions; others have only arrests without conviction. Nonetheless, the authors argue, because of the rise of technology and the ease of accessing data via the Internet— in conjunction with federal and state policy decisions—having even a minor criminal history now carries lifelong barriers that can block successful re-entry and participation in society. The authors further contend that this has broad implications—not only for the millions of individuals who are prevented from moving on with their lives and becoming productive citizens but also for their families, communities, and the national economy.

According to the author, this report offers a road map for the administration and federal agencies, Congress, states and localities, employers, and colleges and universities to ensure that a criminal record no longer presents an intractable barrier to economic security and mobility. Bipartisan momentum for criminal justice reform is growing, due in part to the enormous costs of mass incarceration, as well as an increased focus on evidence-based approaches to public safety. Policymakers and opinion leaders of all political stripes are calling for sentencing and prison reform, as well as policies that give people a second chance. Now is the time to find common ground and enact meaningful solutions to ensure that a criminal record does not consign an individual to a life of poverty