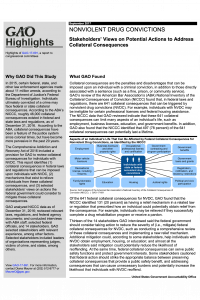 GAO analyzed National Inventory of Collateral Consequences of Conviction (NICCC) data as of December 31, 2016; reviewed relevant laws, regulations, and federal agency documents; and conducted interviews with ABA staff, selected federal officials, and 14 stakeholders. The study found that, in federal laws and regulations, there are 641 collateral consequences that can be triggered by nonviolent drug convictions (NVDC). For example, individuals with NVDC may be ineligible for certain professional licenses and federal housing assistance. The NICCC data that GAO reviewed indicate that these 641 collateral consequences can limit many aspects of an individual's life, such as employment, business licenses, education, and government benefits. In addition, GAO also found that the NICCC identified that 497 (78 percent) of the 641 collateral consequences can potentially last a lifetime.

Of the 641 federal collateral consequences for NVDC, GAO found that the NICCC identified 131 (20 percent) as having a relief mechanism in a related law or regulation that prescribed how an individual could potentially obtain relief from the consequence. For example, individuals may be relieved if they successfully complete a drug rehabilitation program or receive a pardon.