The New Civil Death: Rethinking Punishment in the Era of Mass Conviction 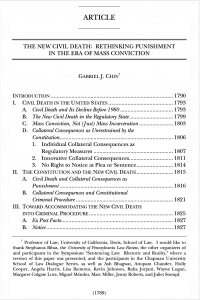 This article discusses the fact that most people convicted of felonies are not sentenced to prison, with a majority receiving straight probation, or probation with a jail term. However, that author argues, this hardly means that the conviction is inconsequential. Tens of thousands of federal, state, and local laws, regulations, and ordinances restrict the civil rights, employment, eligibility for public benefits, residence and other aspects of the status of convicted persons. Accordingly, the author contends, for many, the most serious and long-lasting effects of conviction flow from the status of being convicted and the concomitant lifetime subjection to collateral consequences. However, the author argues, courts generally treat collateral consequences as non-punitive civil regulations, and therefore not subject to constitutional limitations on criminal punishment.

The article further contends that collateral consequences have practically revived the traditional punishment of civil death, which deprived offenders of civil rights, such as the right to sue, and other aspects of legal status. While most civil death statutes were repealed in the Twentieth Century, the author asserts that its equivalent has been reproduced through systematic collateral consequences. Instead of losing rights immediately, convicted people now hold their rights at sufferance, subject to limitation and restriction at the discretion of the government.

The article asserts that the new civil death, loss of equal legal status and susceptibility to a network of collateral consequences, should be understood as constitutional punishment. In the era of the regulatory state, collateral consequences may now be more significant than was civil death in past decades. As such, the author believes that the actions of judges, defense attorneys, and prosecutors should attend to what is really at stake in criminal prosecutions.