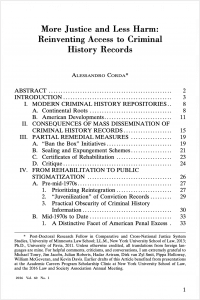 According to the author, this article challenges the conventional wisdom that public access and dissemination of criminal history information raise no special problems once a conviction occurs. The label “offender” burdens convicted individuals long after their debt to society has been paid. Numerous damaging effects labeled as mere “informal” collateral consequences of conviction go largely unquestioned. Contemporary debate revolves around partial remedial measures (“Ban the Box,” sealing and expungement schemes, issuance of certificates of relief/rehabilitation).

These narrow although important proposals largely miss the point. For different reasons, they fail to effectively curb the devastating stigma produced by the current system that creates huge obstacles to people’s efforts to live law-abiding lives, and fosters unjust discrimination. How, when, and why criminal records should be generally accessible needs to be reconceived. Until the mid-1970s, conviction records were largely inaccessible except to public officials. There was near consensus that widespread dissemination is undesirable and inimical to reintegration of ex-offenders.