Managing Collateral Consequences in the Sentencing Process: The Revised Sentencing Articles of the Model Penal Code 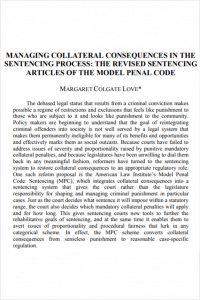 This article argues that the debased legal status that results from a criminal conviction makes possible a regime of restrictions and exclusions that feels like punishment to those who are subject to it and looks like punishment to the community. The author contends that policymakers are beginning to understand that the goal of reintegrating criminal offenders into society is not well served by a legal system that makes them permanently ineligible for many of its benefits and opportunities and effectively marks them as social outcasts. The author continues that, because courts have failed to address issues of severity and proportionality raised by punitive mandatory collateral penalties, and because legislatures have been unwilling to dial them back in any meaningful fashion, reformers have turned to the sentencing system to restore collateral consequences to an appropriate regulatory role.

One such reform proposal is the American Law Institute’s Model Penal Code: Sentencing (MPC), which integrates collateral consequences into a sentencing system that gives the court rather than the legislature responsibility for shaping and managing criminal punishment in particular cases. Just as the court decides what sentence it will impose within a statutory range, the court also decides which mandatory collateral penalties will apply and for how long. The article's authors argues that this gives sentencing courts new tools to further the rehabilitative goals of sentencing, and at the same time it enables them to avert issues of proportionality and procedural fairness that lurk in any categorical scheme.