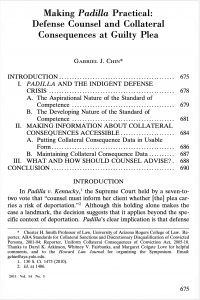 This essay, part of the 2010 Wiley A. Branton Symposium at Howard Law School, addresses some of the practicalities of making the Supreme Court's decision in Padilla v. Kentucky, 130 S. Ct. 1473 (2010) an operational reality. Padilla held that defense counsel have an ethical obligation to advise their clients of the possibility of deportation when pleading guilty. The article's author argues that the inescapable logic of Padilla is that counsel's duty will extend to warning about other serious collateral consequences as well. The author further argues that putting more demands on overburdened defense counsel raises a number of issues.

First, how can public defenders, who are already challenged in providing basic representation add more to their duties? Second, how can defense counsel, who are not specialists in collateral consequences, be aware of the hundreds or thousands of potential collateral consequences which could apply in any given case? This essay proposes that the standards of competent representation should continue to develop even if they are not always met because of governmental funding choices. In addition, the author asserts that introducing collateral consequences into plea negotiation will sometimes facilitate a better disposition of the criminal case. Although Padilla means more work for defense attorneys, the author contends, it also promises better outcomes for clients. The essay also makes some suggestions about ways of identifying the most common and most serious collateral consequences in each state, to simplify the process of advising clients.