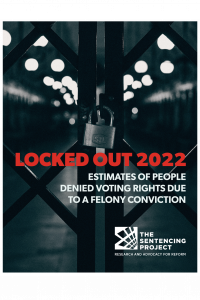 According to this report from The Sentencing Project, laws in 48 states ban people with felony convictions from voting. In 2022, an estimated 4.6 million Americans, representing 2 percent of the voting-age population, will be ineligible to vote due to these laws or policies, many of which date back to the post-Reconstruction era. As the United States examines the stability of its democracy and the fairness of its elections, particularly within marginalized communities, the impact of voting bans on people with felony convictions should be front and center in the debate.

This 2022 report updates and expands upon 20 years of work chronicling the scope and distribution of felony disenfranchisement in the United States. As in 2020, we present national and state estimates of the number and percentage of people disenfranchised due to felony convictions, as well as the number and percentage of the Black and Latinx populations impacted. Although these and other estimates must be interpreted with caution, the numbers presented here represent our best assessment of the state of felony disenfranchisement at the time of publishing.