Justice Department Administration of the President's Pardon Power: A Case Study in Institutional Conflict of Interest 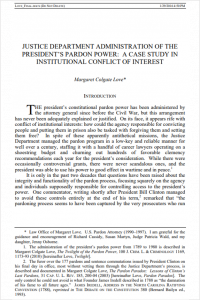 As this article discusses, the President’s constitutional pardon power has been administered by the attorney general since before the Civil War, but this arrangement has never been adequately explained or justified. On its face, the author argues, it appears rife with conflict of institutional interests: how could the agency responsible for convicting people and putting them in prison also be tasked with forgiving them and setting them free? In spite of these apparently antithetical missions, the author continues, the Justice Department managed the pardon program in a low-key and reliable manner for well over a century, staffing it with a handful of career lawyers operating on a shoestring budget, and churning out hundreds of favorable clemency recommendations each year for the president’s consideration. While there were occasionally controversial grants there were never scandalous ones, and the president was able to use his power to good effect in wartime and in peace.

This essay concludes that the culture and mission of the Justice Department have in recent years become determinedly and irreconcilably hostile to the beneficent purposes of the pardon power, and to its regular use by the president. The only way to deal with the institutional conflict that produced and perpetuates this situation, according to the author, is to transfer the pardon program to the president’s direct supervision in the Executive Office of the President. This move will have a variety of benefits, including facilitating the president’s ability to oversee the workings of the criminal justice system, for which he has a special responsibility under the Constitution. More specifically, it will introduce salutary political accountability to federal prosecutions through presidential oversight and potential revision. Finally, it will give the president control for the first time in decades over his own “benign prerogative.”