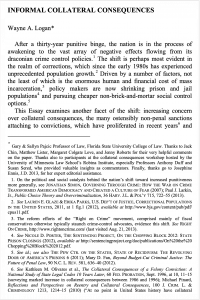 According to its author, this essay fills an important gap in the national discussion now taking place with regard to collateral consequences, the broad array of non-penal disabilities attaching to criminal convictions. In the wake of the Supreme Court’s landmark 2010 decision in Padilla v. Kentucky, efforts are now underway to inventory collateral consequences imposed by state, local, and federal law. Only when the full gamut of such consequences is known, law reformers urge, can criminal defendants understand the actual impact of their decision to plead guilty.

The increased concern over collateral consequences, while surely welcome and important, has however been lacking in a key respect: it has ignored the many adverse social, medical and economic consequences of conviction, experienced by individuals independent of formal operation of law. This essay augments the consciousness-raising effort now under way and makes the case that informal, and not just formal collateral consequences of conviction, should figure in post-Padilla policy efforts to achieve a fairer and more transparent criminal justice system.