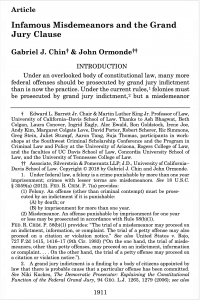 Part I of this article explains that serious consequences may fall on people convicted of federal misdemeanors.These include deportation, sex offender or other criminal registration, loss of civil rights, and penalties flowing from the permanent change of legal status caused by criminal conviction. Misdemeanor convictions and criminal records may also give rise to profound stigma, resulting in exclusion from a variety of benefits and opportunities conferred by the government and private parties.

Part II outlines the jurisprudence of the Grand Jury Clause, pursuant to which the Supreme Court in the late nineteenth and early twentieth centuries rebuffed attempts by the Department of Justice to prosecute serious misdemeanor offenses by information. The principle coming out of the decisions, consistent with the drafting history, is that offenses potentially resulting in stigmatizing punishments must be prosecuted by grand jury indictment. A stigmatizing punishment is one that degrades the offender’s status, indicating that the person is less than a full member of the community. Stigmatizing punishments include corporal punishment, incarceration in a prison or penitentiary as opposed to a jail, loss of civil rights or imposition of civil disabilities, and convictions implying moral turpitude. The Supreme Court also made clear that what is infamous changes from era to era, as the social meaning of stigma evolves.