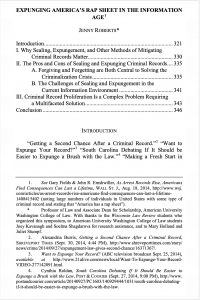 As the Wall Street Journal first put it in 2014, “America has a rap sheet.” In 2015, between 70 and 100 million people in the United States had a criminal arrest or conviction record, and anyone — including employers, landlords, and data collection companies — can easily access these records on line. At the same time, this article states, collateral consequences of even the most minor offenses have increased exponentially, affecting employment, housing, parenting, and just about every other aspect of daily life. The author argues that the convergence of mass criminalization, ubiquitous criminal records, and pervasive collateral consequences is a major factor in the criminal justice system’s troubling racial and economic disparities.

This article describes why well-crafted sealing and expungement laws matter, responds to the major moral and practical arguments against such laws, and situates sealing and expungement as part of a comprehensive scheme for relief from a criminal record. Reforms might include regulating data brokers to ensure that sealed or expunged records are removed from their databases, banning employers from asking about arrests not ending in conviction or expunged convictions in the absence of a statutory mandate to do so, and offering employers who comply with such rules immunity from certain negligent hiring lawsuits.