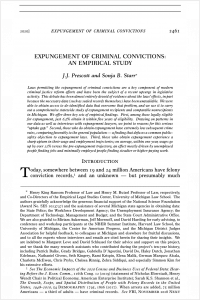 According to the article's authors, laws permitting the expungement of criminal convictions are a key component of modern criminal justice reform efforts and have been the subject of a recent upsurge in legislative activity. The authors further contend that this debate has been almost entirely devoid of evidence about the laws’ effects, in part because the necessary data (such as sealed records themselves) have been unavailable. In writing this article, the authors were able to obtain access to de-identified data that overcome that problem, and used it to carry out a comprehensive statewide study of expungement recipients and comparable nonrecipients in Michigan.

In the study, the authors offer three key sets of empirical findings:

Based on the results of the study, the authors contend that their findings strongly support increasing the availability of expungement, and particularly efforts to make expungements automatic, or at least procedurally easy to obtain. The authors found that those whose records are expunged experience large gains in employment rates and wages, and while some of these gains may have their source in other factors such as underlying motivation, expungements very likely cause a substantial portion of these improvements. The expungement effects revealed in the study, the authors contend, imply that record clearing compares favorably as a strategy to other policy interventions that seek to improve employment outcomes.