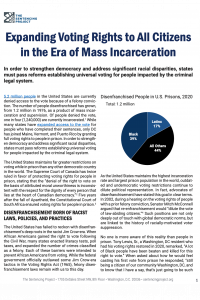 As the brief points out, 5.2 million people in the United States are currently denied access to the vote because of a felony conviction. The number of people disenfranchised has grown, from 1.2 million in 1976, as a product of mass incarceration and supervision. Of people denied the vote, one in four (1,240,000) are currently incarcerated.

While many states have expanded access to the vote for people who have completed their sentences, only DC has joined Maine, Vermont, and Puerto Rico by granting full voting rights to people in prison.

This brief argues that, in order to strengthen democracy and address significant racial disparities, states must pass reforms establishing universal voting for people impacted by the criminal legal system.