Disenfranchised by Debt: Millions Impoverished by Prison, Blocked from Voting

Alliance for a Just Society 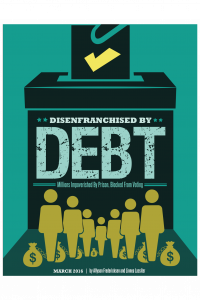 While most people over the age of 18 in the United States are guaranteed the right to vote, those with felony convictions who have served their sentence face a variety of barriers to voting, including, in many states, the requirement that they pay any outstanding fines and fees owed to the courts. According to this report's authors, this practice amounts to limiting the right to vote based on ability to pay—in essence, a poll tax. These fines and fees, called legal financial obligations (LFOs) can include those attached to a conviction or citation, or they can be from expenses accrued during incarceration – like the cost of laundry service. LFOs can also include interest accrued from the original fines and fees during incarceration or during repayment.

This report contends that ending criminal disenfranchisement would be the best way to avoid the abuses and bureaucracies that limit voting rights for those with court debt but discusses a number of reforms that states could immediately implement to remove ability to pay as a barrier to voting. These reforms include eliminating both explicit and de facto LFO disenfranchisement for those who would otherwise be eligible to regain the right to vote; establishing clear criteria for determining ability to pay and adjusting total legal financial obligations or removing LFO repayment as a requirement for voting for those found unable to pay; and automatically registering anyone with a conviction record who becomes eligible to vote.