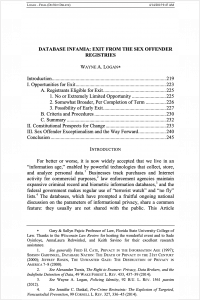 Since originating in the early-mid 1990s, sex offender registration and community notification laws have swept the country, now affecting the lives of hundreds of thousands of individuals. The laws require that individuals provide, update and at least annually verify personal identifying information, which governments make publicly available via the Internet and other means. Typically retrospective in their reach, and sweeping in their breadth, the laws, according to the article's author, can target individuals for their lifetimes, imposing multiple hardships.

This symposium contribution surveys the extent to which states now afford registrants an opportunity to secure relief from registration and community notification and examines the important legal and policy ramifications of the limited exit options made available.