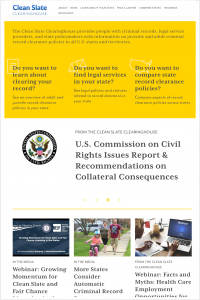 Roughly 70 million adults in the U.S. have a criminal record. Additionally, more than one million youth are charged with crimes and acquire juvenile court records each year. For both adults and juveniles, these records have long-lasting collateral consequences that may hinder their attempts at gaining employment, housing, and even returning to school.

Criminal record clearance enables a person’s criminal history information to be removed from easy public access, most often with the goal of improving employment and other outcomes for the affected person. Criminal record clearance is referred to by various terms in various states: commonly used terms include sealing, expungement, restricting, deleting, closure, and destruction, among others.