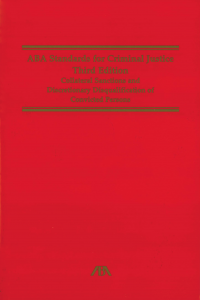 Collateral consequences of criminal convictions, also called “collateral sanctions,” are legal penalties that take away rights, access to programs or services, or that impose another type of disadvantage that may not be part of a person’s sentence. According to the American Bar Association (ABA), when properly administered, such sanctions can play an important role in achieving articulable government objectives. But many such sanctions, says the ABA, bear no relation to an underlying offense and undermine such goals. These sanctions may be technical disabilities such as the revocation of a driver’s license, or they can prevent employment, access to human services, or even the right to vote.

As outlined in this seminal volume, the imposition of collateral penalties has serious implications, both in terms of fairness to the individuals affected, and in terms of the burdens placed on the community. If promulgated and administered indiscriminately, a regime of collateral consequences may frustrate the chance of successful re-entry into the community, and thereby encourage recidivism. The volume discusses that there has been no consensus reached about what makes a penalty "collateral," or about the due process implications of such a label.

These Standards proceed from a premise that it is neither fair nor efficient for the criminal justice system to label significant legal disabilities and penalties as "collateral" and thereby give permission to ignore them in the process of criminal sentencing, when in reality those disabilities and penalties can be the most important and permanent results of a criminal conviction. These new Standards consider penalties and disadvantages triggered exclusively by criminal convic- tion to be part of the criminal justice process, and not solely civil, administrative or regulatory. These Standards provide the types of implementing provisions that naturally follow from this premise.

The two-fold objective of these Standards is to (1) integrate all legal consequences of conviction into a single system, through consistent terminology and analytical concepts and (2) focus attention on the impact of collateral consequences on the process by which convicted persons re-enter the free community, and are encouraged and supported in their efforts to become law-abiding and productive members of society.

The Standards are laid out three sections: