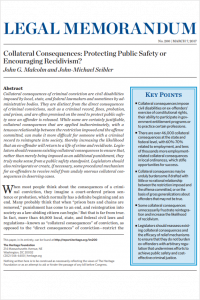 According to the author, collateral consequences are distinct from the direct consequences of criminal convictions, such as a criminal record, fines, probation, and prison, and are often premised on the need to protect public safety once an offender is released. While some are certainly justifiable, collateral consequences that are applied indiscriminately, with a tenuous relationship between the restriction imposed and the offense committed, can make it more difficult for someone with a criminal record to reintegrate into society, thereby increasing the likelihood that an ex-offender will return to a life of crime and recidivate. Legislators should reassess existing collateral consequences to ensure that, rather than merely being imposed as an additional punishment, they truly make sense from a public safety standpoint. Legislators should also reinvigorate or create, if necessary, some procedural mechanism for ex-offenders to receive relief from unduly onerous collateral consequences in deserving cases.