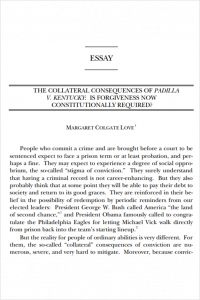 According to the author, the reality for people of ordinary abilities is very different. For them, the so-called “collateral” consequences of conviction are numerous, severe, and very hard to mitigate. Moreover, because conviction-based dis-qualifications are generally imposed by statute or regulation rather than by a judge in open court, criminal defendants usually have no idea what is in store for them. While conventionally labeled as “civil,” collateral consequences are increasingly understood and experienced as criminal punishment, and never-ending punishment at that.

In Padilla v. Kentucky, the Supreme Court suggested that these disproportionate, rigid, and largely secret penalties have constitutional limits. At one level, Padilla is about a lawyer’s duty to warn a client considering a guilty plea about the likelihood of deportation. At another, Padilla sends a shot across the bow of a justice system whose effects are increasingly felt in contexts over which courts have no control. Padilla gives new force to an argument that criminal offenders are entitled to a chance at forgiveness.