Collateral Consequences: Hearing Before the U.S. House of Representatives Over-Criminalization Task Force of 2014 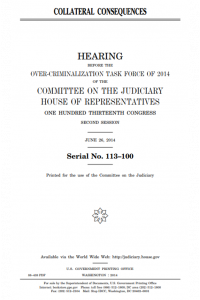 According to the hearing records, the 8th hearing of the U.S. House of Representatives Committee on the Judiciary, Over-Criminalization Task Force focused on the collateral consequences associated with a criminal conviction. The hearing examined the consequences that follow a criminal conviction which may not be immediately apparent during the pendency of a criminal case. Over its first seven hearings, the Task Force examined issues related to criminal intent, over-federalization, penalties, and other issues which affect criminal defendants during the investigative and prosecutorial phases of the criminal justice process.