Collateral Consequences and the Preventive State 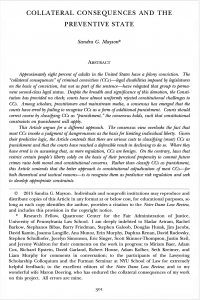 According to this article, approximately eight percent of adults in the United States have a felony conviction. The author argues that the “collateral consequences” of criminal conviction (CCs)—legal disabilities imposed by legislatures on the basis of conviction, but not as part of the sentence—have relegated that group to permanent second class legal status. Despite the breadth and significance of this demotion, the author continues, the Constitution has provided no check; courts have almost uniformly rejected constitutional challenges to CCs. Among scholars, practitioners and mainstream media, a consensus has emerged that the courts have erred by failing to recognize CCs as a form of additional punishment. Courts should correct course by classifying CCs as “punishment,” the consensus holds, such that constitutional constraints on punishment will apply.

This article argues for a different approach. The consensus view overlooks the fact that most CCs invoke a judgment of dangerousness as the basis for limiting individual liberty. Given their predictive logic, the article contends that there are serious costs to classifying (most) CCs as punishment and that the courts have reached a defensible result in declining to do so. Where they have erred is in assuming that, as mere regulation, CCs are benign. On the contrary, laws that restrict certain people’s liberty solely on the basis of their perceived propensity to commit future crimes raise both moral and constitutional concerns. Rather than classify CCs as punishment, this article contends that the better approach to constitutional adjudication of most CCs—for both theoretical and tactical reasons—is to recognize them as predictive risk regulation and seek to develop appropriate constraints.