Collateral Consequences after Padilla v. Kentucky: From Punishment to Regulation 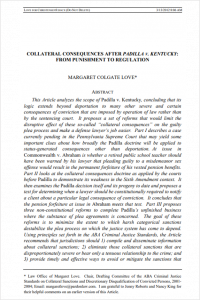 This article analyzes the scope of Padilla v. Kentucky, concluding that its logic extends beyond deportation to many other severe and certain consequences of conviction that are imposed by operation of law rather than by the sentencing court. In it, the author proposes a set of reforms that would limit the disruptive effect of these so-called “collateral consequences” on the guilty plea process and make a defense lawyer’s job easier. Part I describes a case currently pending in the Pennsylvania Supreme Court that may yield some important clues about how broadly the Padilla doctrine will be applied to status-generated consequences other than deportation while Part II looks at the collateral consequences doctrine as applied by the courts before Padilla to demonstrate its weakness in the Sixth Amendment context. Part III then proposes three non-constitutional reforms to complete Padilla’s unfinished business where the substance of plea agreements is concerned, with the goal being to minimize the extent to which harsh categorical sanctions destabilize the plea process on which the justice system has come to depend.

Using principles set forth in the ABA Criminal Justice Standards, the article recommends that jurisdictions should (1) compile and disseminate information about collateral sanctions; (2) eliminate those collateral sanctions that are disproportionately severe or bear only a tenuous relationship to the crime; and (3) provide timely and effective ways to avoid or mitigate the sanctions that remain. The author concludes that these reforms will not only shore up the plea system, they will propel a move away from a punitive model of collateral consequences that is frequently self-defeating and unfair to one that can be justified in both moral and utilitarian terms.