Can We Forgive Those Who Batter? Proposing an End to the Collateral Consequences of Civil Domestic Violence Cases 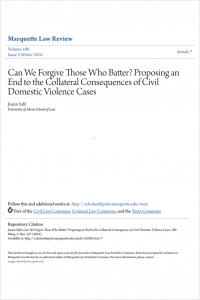 The article reveals that, (at the time of publishing) domestic violence is the most common tort committed in our country, involving nearly 1.3 million victims. The author argues that, when a domestic violence incident occurs, the press regularly reports it and highlighted in these articles is the name of the perpetrator.

Thus, the author argues, perpetrators identified as committing an act of domestic violence face public outrage, contempt, and stigma. This is particularly true if a court determines that the act of domestic violence necessitates a civil protection order (CPO) that bars the perpetrator from having any contact with the victim. Nearly 1.2 million people receive a CPO each year.

The author argues that more people use this civil remedy than those who seek a tort remedy, or those who are involved with the criminal justice system. The CPO process, and its related orders, produces real and lasting “prejudicial collateral legal consequences” that extend past the life of the CPO.