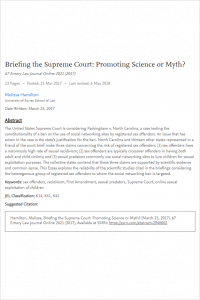 This essay explores the United States Supreme Court's consideration of Packingham v. North Carolina, a case testing the constitutionality of a ban on the use of social networking sites by registered sex offenders. The author discusses that an issue that has arisen in the case is the state’s justification for the ban. North Carolina and thirteen other states represented in a friend of the court brief make three claims concerning the risk of registered sex offenders: (1) sex offenders have a notoriously high rate of sexual recidivism; (2) sex offenders are typically crossover offenders in having both adult and child victims; and (3) sexual predators commonly use social networking sites to lure children for sexual exploitation purposes. The collective states contend that these three claims are supported by scientific evidence and common sense.

The essay also explores the reliability of the scientific studies cited in the briefings considering the heteregenous group of registered sex offenders to whom the social networking ban is targeted.