Beyond the Sentence - Understanding Collateral Consequences 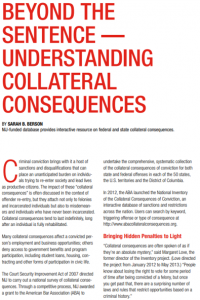 According to this article, criminal conviction brings with it a host of sanctions and disqualifications that can place an unanticipated burden on individuals trying to re-enter society and lead lives as productive citizens. The impact of these “collateral consequences” is often discussed in the context of offender re-entry, but they attach not only to felonies and incarcerated individuals but also to misdemean- ors and individuals who have never been incarcerated. Collateral consequences tend to last indefinitely, long after an individual is fully rehabilitated.

The Court Security Improvement Act of 2007 directed NIJ to carry out a national survey of collateral conse- quences. Through a competitive process, NIJ awarded a grant to the American Bar Association (ABA) to undertake the comprehensive, systematic collection of the collateral consequences of conviction for both state and federal offenses in each of the 50 states, the U.S. territories and the District of Columbia. In 2012, the ABA launched the National Inventory of the Collateral Consequences of Conviction, an interactive database of sanctions and restrictions across the nation.