Beyond Punishment? A Normative Account of the Collateral Legal Consequences of Conviction 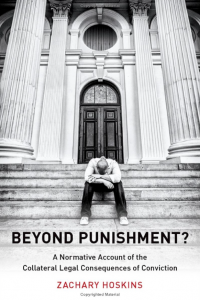 People convicted of crimes are subject to a criminal sentence, but they are also subject to a host of other legal measures: Some are denied access to jobs, housing, welfare, the vote, or other goods. Some may be deported. Others are subject to continued detention. Many have their criminal records made publicly accessible.

The book's author argues that these measures are often more burdensome than an offender’s formal sentence. This is the first (at the time of publication) book-length philosophical examination of these burdensome legal measures, called collateral legal consequences (CLCs). The book draws on resources in moral, legal, and political philosophy to shed light on whether these measures are ever morally justified. It analyzes the various kinds of CLCs imposed in different legal systems and the important moral challenges they raise, and it makes the case that these challenges have been largely overlooked by philosophers.

The book examines whether CLCs can ever be justified as forms of criminal punishment—whether they are consistent with the values and principles that we believe should govern punishment. Then it considers whether CLCs are ever justifiable as civil measures, and specifically what could justify the state in imposing additional burdensome measures on offenders in addition to their punishment. Whether CLCs function as forms of punishment or as civil measures, the book contends that they are justifiable in a far narrower range of cases than we find in current legal practice.